PORT-AU-PRINCE, Haiti – Support Local Production (known as KPL in Creole), an organization co-founded by Mennonite Central Committee (MCC), has been selected by the Haitian government's Presidential Commission on Competition to produce a documentary and a commercial that highlight Haitian agriculture.

The government-funded documentary and commercial will be used in the government's campaign to increase sales of Haitian agricultural products locally and abroad.

Since its founding in January 2008, KPL has produced 10 commercials that encourage Haitians to consume local produce. These are broadcast daily on the publicly owned Haitian National Television.

KPL coordinator Ari Nicolas says, "When we started over a year ago, we had to pay $2,500 a month for the television station to air our commercial two times a day. After the food riots last year, they started giving us free airtime. Now, the government is paying us."

In addition to governmental changes, the national broadcaster recently quit broadcasting commercials for imported rice. Haitian farmers have lost jobs because cheaper, subsidized rice from the United States has flooded the Haitian market.

In response to international encouragement to help alleviate poverty, the Haitian government began market liberalization in 1986. While lowered tariffs brought cheaper imported food to Haiti, they had a devastating effect on agricultural production, particularly in rice, sugar and poultry sectors.

Christian Aid, an international development charity, estimates that around 831,900 Haitians have been affected by the loss of agricultural income.

According to a study in 2008 by the International Centre for Human Rights and Democratic Development, a nonpartisan organization, Haiti now relies on imports for more than half of its food supply.

Nicolas does not blame all Haitian troubles on the market liberalization policies. He says that 300 years of slavery and colonialism taught Haitians they were inferior, and this belief affects them today. "We wear Western clothes, create Western music and eat imported food because we still think who we are and what we can make is no good," he says.

Through commercials, school visits and conferences, KPL reminds Haitians of the importance of valuing their humanity. "As KPL, we are simply trying to make Haitians remember who we are, and what we can produce. Once we can change this mentality, everything else will follow," Nicolas says.

The KPL commercials can be viewed online at mcc.org/haiti.
Sasaye 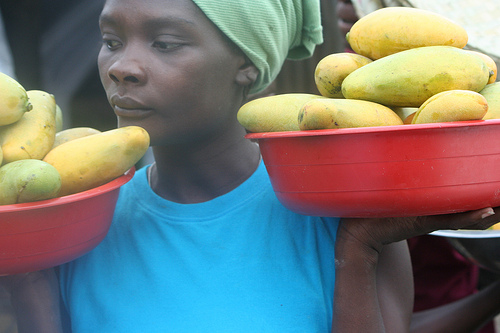