Almost two months after the Haiti earthquake, President René Préval is in Washington to outline his plan for the kind of aid Haiti needs next. It includes seeds and fertilizers for this summer’s crops.

Washington —
Haiti’s President René Préval visits the White House Wednesday to thank the United States for the hundreds of millions of dollars in aid provided since his country’s ruinous earthquake Jan.12.

But he’s also coming to ask that continuing assistance not make matters worse.

Instead of more food donations, for example, Mr. Préval would like to see seeds coming into his country. Long-term debt relief is good, he will say, but cash to repair drainage systems and get schools up and running again will have a more immediate impact.

Préval’s visit, his first meeting with President Obama, comes as Haiti’s earthquake has fallen off front pages but as officials and members of Congress formulate plans for Haiti’s long-term revival and reconstruction. (Envisioning a new Haiti. Monitor report here.)

The temblor, considered by the Inter-American Development Bank to be “the most destructive natural disaster in modern times” given Haiti’s population and economy, left more than 220,000 Haitians dead and caused an estimated $14 billion in damage.

Donors conference at the United Nations
The White House, which is preparing to ask Congress for more than $1 billion in additional aid for Haiti, wants to demonstrate Mr. Obama’s commitment to the Haitian people and also to drum up support for the international donors conference for Haiti, which the US will host at the United Nations in New York March 31, officials say.

Another US objective, especially before the donors meeting, is to demonstrate to a skeptical world that the Haitian government – heavily criticized for its sluggish response after the quake – is operating effectively and capable of managing a significant reconstruction program. (Monitor report: Test for US, Obama in Haiti earthquake response.)

Préval is keenly aware of the importance for him and for Haiti that he appears to be in command – prepared to administer a program that meets Haitian priorities and international demands, say experts in the region and natural-disaster response.

“He needs to have his priority list in his hands when he walks into the Oval Office,” says Johanna Mendelson Forman, a senior associate with the Americas program at the Center for Strategic and International Studies in Washington.

Countering the criticism Préval and the Haitian government have endured since the earthquake, Ms. Forman says, “He’s been moving things behind the scenes in an effective way.” But, she adds, “He also needs to get out front so people see something from the leadership.”

Judging from comments Préval made before departing Haiti for Washington, he does have some definite ideas on how assistance to Haiti should proceed.

He says the emergency phase of recovery is over, and that continued food aid will only disrupt Haiti’s economy. Better to focus on seeds and fertilizers so people can be employed while food is grown locally, he says. At the same time, assisting agriculture would boost the government’s plans to decentralize the population and the economy outside of an overcrowded Port-au-Prince.

“His [Préval’s] plan makes sense, and I think he’ll hear support for it in his meeting with President Obama,” says Mark Cohen, a food-aid specialist with Oxfam America in Washington.

What Préval probably means, Mr. Cohen adds, is that seeds and fertilizer should be provided quickly, and that food aid “already in the pipeline” be allowed to “taper off” so that Haiti’s next harvest early this summer is bountiful but does not encounter a glutted market.

Longer term, Cohen says, Préval’s plan will require more than seeds and fertilizer and can work only if better job opportunities, schools, and services are provided so that rural areas become as attractive as the capital as a place to live.

Préval is also looking for a quick inflow of cash to help prepare Haiti for the fast-approaching rainy season. In the heavily damaged capital of Port-au-Prince – where about 1 million people were left homeless, and streets remain clogged with rubble – Préval wants to proceed with building long-term camps and repairing drainage systems.

CSIS’s Forman says Préval’s Washington visit is likely to offer clues as to the “balancing act that is going on” between a weak but functioning government and the pressures it is feeling from outside donors and the international community.

“The Haitian government is well aware of its own weaknesses. It was limited before this disaster and it is limited now,” she says. “But it is a sovereign entity, and for the country’s long-term good the government has to show it has a plan and a voice with which to articulate it.”
revelation 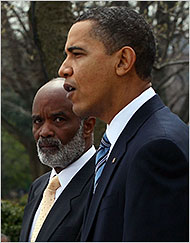 Instead of more food donations, for example, Mr. Preval would like to see seeds and fertilizers coming into his country. Long-term debt relief is good, he will say, but cash to repair drainage systems and get schools up and running again will have a more immediate impact.Assisting agriculture would boost the government’s plans to decentralize the population and the economy outside of an overcrowded Port-au-Prince.

Another US objective, especially before the donors meeting,is to demonstrate to a skeptical world that the Haitian government – heavily criticized for its sluggish response after the quake – is operating effectively and capable of managing a significant reconstruction program. (Monitor report: Test for US, Obama in Haiti earthquake response.)