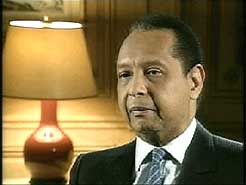 Duvalier returned Sunday to Haiti after nearly 25 years in exile, a surprising move that comes as his country struggles with a political crisis and the stalled effort to recover from last year's devastating earthquake. A judge will decide whether Duvalier will be tried on charges that include corruption and embezzlement for allegedly pilfering the treasury before his 1986 ouster, according to his lawyer.
Earthquake, cholera, and presidential elections, move over!
Former Haitian president Jean Claude Duvalier, a less lethal form of death that tormented Haiti for 15 years almost three decades earlier, is in the house, fresh from Paris where he has been in exile since his February 1986 violent overthrow.

Since last Sunday around 6 PM when he landed aboard Air France at Haiti International Airport pundits and ordinary citizens have been asking the same two questions: Why this sudden visit and why now.
Responses so far abound but are for the most part unconvincing. All responses share a common element, though: President Préval may be trying to divert attention from his problems, the presidential election in particular. Not true.
Indeed, as Jean Claude Duvalier - his passport now seized - is again holed up in his hotel room after he has been questioned for more than four hours Tuesday by the Justice system, this is what’s known.

Jean Claude Duvalier’s unexpected arrival in Haiti coincides with a one-year old Swiss law that will take effect at the beginning of February – February 1st to be exact. This law is known as the Lex Duvalier law (Restitution of Illicit Assets Act, RIAA), which allows the Swiss cabinet to block ill-gained funds and assets and gives a ten-year time period in which the assets can be confiscated after being blocked.
This confiscated fund once returned to the interested country must be used to improve the quality of life for the wider population, strengthening the judicial system, and the fight against crime.

It’s apparent that this law may lead to an immediate confiscation of the Duvalier money evaluated at about $7 million right after February 1, 2011.
However, there is a provision under the same law that allows Duvalier and other corrupt individuals to try to recoup their confiscated money and assets as long as they return to their native country and the local justice system doesn’t bring any charges against them.
So, Jean Claude Duvalier, the king of corruption and currently living in “relative poverty” according to various reports, returned to Haiti for a brief visit as part of his effort to get back his money, confidently assuming he wouldn’t be detained nor charged when setting foot in Haiti.

That’s the fundamental issue but there are at least two other factors that further prod him to make this trip.

One, there has been in Haiti a gradual recycling of some high officials (military and civil) of the despised Duvalier regime, starting with Aristide in 2000, pursued systematically during the interim Boniface/Latortue regime and unfortunately kept during this second Préval term.

Further, all three major candidates harbor their own macoutes while a Martelly win would surely bring Haiti back to the pre-1986 environment. Duvalier may think he can count on a few friends to plead his case vis a vis the current officials.

Two, the unstable, volatile political and social environment may have given Duvalier and his cronies the false hope that the people of Haiti have better things and they would go their sad and oblivious way.

It’s time that the full weight of the justice system is thrown at him.
For this to happen, the people of Haiti have to demand – and diligently work for - no less.
Read more: http://www.miamiherald.com/2011/01/19/v-print/2023948/understanding-jean-claude-duvaliers.html#ixzz1BgzkFrQX
Invité

Mario Joseph, who works for a human rights organization in Port-au-Prince, is seeking evidence to build a case against Duvalier that would see him charged with crimes against humanity.

“I’m calling on the diaspora in Canada to file complaints against Duvalier,” he told a news conference in Montreal. “I need them to mobilize.”Duvalier unexpectedly returned to Haiti last Sunday, the first time he’s been back in the country since being ousted by a popular uprising in 1986.
Haitian prosecutors have since charged him with corruption and embezzlement during his 15-year rule.
But Duvalier’s critics argue those charges should be expanded, taking into account the rampant torture and murder that characterized his regime.
Rights group Amnesty International announced Friday it gave more than 100 documents to the Haitian government this week detailing rights abuses under Duvalier.

The group said Haitian authorities have indicated they are opening an investigation into a possible crimes against humanity charge.
“Investigating Jean-Claude Duvalier for the human rights crimes committed during his time in power is a massive step forward,” Amnesty said in a statement.

“What we need to see now is a swift and impartial process, in line with international standards, that truly brings justice for those who have been waiting for too long.”
There are about 100,000 Canadians of Haitian origin; many fled Haiti because of human-rights abuses committed by the regimes of Baby Doc and his father, François (Papa Doc) Duvalier.

Local activists believe at least two ex-Duvalier cabinet ministers are living in the Montreal-area.“The Canadian government has to make an effort” toward prosecuting these individuals, Joseph said.

“Now that the file is open, it shouldn’t only be about Duvalier but all these others as well.”
Le gros roseau

The international community which doesn't miss an occasion to say that haiti is the poorest country in the western hemisphere must show its sincerity in fighting corruption.The french government which gives political asylum to Duvalier for 25 years is an acomplice of this corruption AND NOT A FRIEND OF HAITI .The swiss bankers who keep his money in their banks instead of returning it to HAITI CONTRIBUTE TO THE PROVERTY OF HAITI. tHE INFLUENTIAL REPUBLICAN AMERICAN SENATORS WHO USED TO RECEIVE MONEY FORM PAPA DOC ARE CONTRIBUTORS TO HAITI POVERTY. STOP YOUR HYPOCRISY .HELP HAITI RECUPERATE ITS MONEY FROM THESE VULGAR GANGSTERS.tHEN AND ONLY THEN YOU CAN SAY YOU ARE HELPING THE COUNTRY.
Contenu sponsorisé