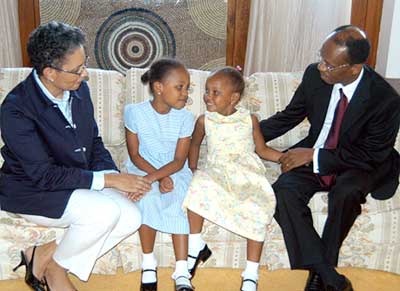 Let Aristide Return!
by Stephen Lendman
On February 29, 2004, US marines abducted him at gunpoint, airlifting him forcibly to the Central Africa Republic. It was one of Haiti's darkest moments, losing its beloved leader, reelected President in 2000 with 92% of the vote.
For over six years, he's been exiled in South Africa, wants to return, and on January 19, wrote an open letter, thanking his host country and their people for welcoming him hospitably, saying:
Since forcibly abducted, "the people of Haiti have never stopped calling for my return....Despite the enormous (post-quake) challenges that they face....their determination to make the return happen has increased."

"As far as I am concerned, I am ready....today, tomorrow, at any time. The purpose is very clear: To contribute to serving my Haitian sisters and brothers as a simple citizen in the field of education."

Returning is also vital "for medical reasons: It is strongly recommended that I not spend the coming winter in South Africa because in 6 years I have undergone 6 eye surgeries. The surgeons are excellent and very well skilled, but the unbearable pain experienced in the winter must be avoided in order to reduce any risk of further complications and blindness."

Aristide is ready to come any time, and hopes Haitian and South African officials let him.
Of course, Washington controls all Haitian affairs.

The Bush administration ousted him in 2004, militarily occupied the country with proxy Blue Helmet paramilitaries, banished him abroad, and thus far Obama won't let him back. One word from him changes everything. So far it's not forthcoming

He's been treated maliciously, victimized by Washington's intolerance to democracy, abroad and at home.
It's time public outrage demanded better, including in Haiti, the region's poorest, most oppressed nation, the rights of their people entirely denied, including having their beloved leader back home with them.

New York Times Coverage of Haiti under Aristide
After Washington's February 29, 2004 middle-of-the-night coup ousted him, a Times March 1 editorial lied, saying:
-- he resigned;
-- letting marines abduct him "was the right thing to do;"
-- they only came after "Mr. Aristide yielded power;"
-- he "contributed significantly to his own downfall (because of his) increasingly autocratic and lawless rule;" and
-- he manipulated the 2000 legislative elections and didn't "deliver the democracy he promised."

Maliciously false on all counts.
Under Aristide, Haiti had its only freedom since successfully liberated in 1804, turning slaves into citizens for the first time.
On January 19, Times writer Ginger Thompson headlined, "Aristide Says He Is Ready to Return to Haiti, Too," saying:
Days after Duvalier's return, he "issued a statement on Wednesday that fueled rumors that he, too, was angling to return."

"Angling?" He explained clearly, why, and as a Haitian citizen, he's entitled under international law, including the International Covenant on Civil and Political Rights and Universal Declaration of Human Rights, giving everyone the right to leave and return to their countries.

Unwittingly in part, Thompson exposed the malicious Times 2004 editorial claiming he resigned and yielded power, saying he "was ousted in 2004 in the midst of growing unrest and under intense pressure from the United States."

In fact, Washington instigated unrest and "pressure(d)" Aristide at gunpoint by trained marine killers.
Aristide's statement, said Thompson, "threatened to fuel tensions already stirred by" Duvalier's return.
Of course, one event has nothing to do with another, except to explain that if a former despot comes freely, letting a beloved democrat is imperative.

She also said as President, Aristide "became notorious for his violent crackdowns of political dissent" when, if fact, he did nothing of the kind. Flippantly, she claimed he's "been hopscotching across Central America and the Caribbean in anticipation of making his own surprise re-entry. In fact, in March 2004, he returned briefly to Jamaica. Activist lawyer and TransAfrica founder Randall Robinson accompanied him, telling Democracy Now on March 25:

"I have learned from a White House source that Condoleezza Rice has pointedly threatened the Jamaican government, telling it to expel President Aristide or face the consequences. The (Bush) administration wants (him) out of the region. (It) views his mere presence in Jamaica as a threat to their (hegemonic) control along with the thugs and the installed (Haitian) government."
Aristide arrived in Jamaica on March 14, 2004. On March 25, the Jamaican government said he'd take "permanent asylum" in South Africa after its April 14 elections. He's been there since, "hopscotch(ing)" nowhere.

Further, Thompson claimed he has no valid Haitian passport, saying the Preval government won't issue him one so he can't return, despite knowing (or should know) that citizens don't need passports to their own countries.
At issue is one unnamed analyst's opinion, saying:

"Aristide could have 15 passports and he's still not going to come back to Haiti (because) France and the United States are standing in the way."

In fact, Washington has full control as colonial occupier, denying Haitians all rights, including sovereignty, democratic elections with all legitimate parties participating, and the right of their beloved leader to return in any capacity.

He only wishes to as a private citizen for health reasons and to provide whatever help he can.
No longer should he be denied.
Let Aristide return!
Invité

Préval said "this does not depend of my decision"
Invité

Préval said "this does not depend of my decision"