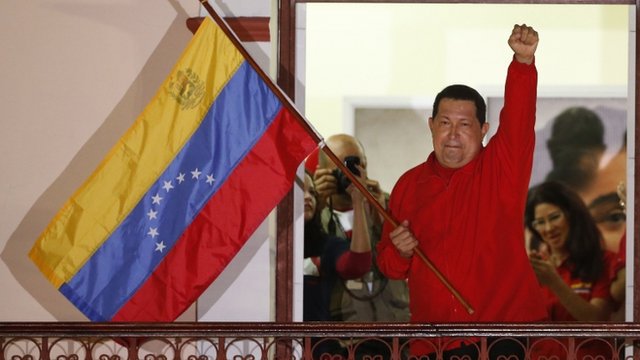 The BBC's Sarah Grainger reports from Caracas, where she says street parties broke out the moment the result was announced

Venezuelan President Hugo Chavez has hailed a "perfect victory", after defeating Henrique Capriles to secure a fourth term in office.Mr Chavez won 54% of the vote, the electoral council announced, with turnout at about 81%.

Brandishing a replica of the sword of independence hero Simon Bolivar, he pledged Venezuela would continue its "march towards democratic socialism".

But he also vowed to engage opponents and to be a "better president".

Noisy celebrations among Chavez supporters erupted across the capital, Caracas, following the announcement of the result.

Mr Chavez addressed them from the balcony of the presidential palace.


<BLOCKQUOTE>
I promise you I'll be a better president”
</BLOCKQUOTE>End Quote Hugo Chavez
"Truthfully, this has been the perfect battle, a democratic battle. Venezuela will continue its march toward the democratic socialism of the 21st century."

But Mr Chavez also accepted that there had been a significant opposition vote, reducing his victory margin from 27 points in 2006 to just 10 points over Mr Capriles.

He praised the opposition for recognising the election result, and said he was "stretching out my hands and heart on our behalf because we are brothers in Bolivar's homeland".

He also invited to dialogue all those he said were "sowing hatred and social venom".

Mr Chavez recognised his new government would need "to respond with greater efficacy and efficiency to the needs of our people", adding: "I promise you I'll be a better president."

"I'm celebrating with a big heart - Chavez is the hope of the people and of Latin America," said Chavez supporter Mary Reina.

"The revolution will continue, thanks to God and the people of this great country."

At the Capriles' campaign headquarters, some opposition supporters were in tears at the news.

"I want to congratulate the candidate, the president of the republic," he said at his campaign headquarters. 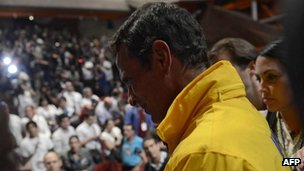 Henrique Capriles urged Mr Chavez to work for all Venezuelans
He added: "We have planted many seeds across Venezuela and I know that these seeds are going to produce many trees. I will continue working to build one country."

Mr Capriles said he hoped Mr Chavez would recognise that almost half the country disagreed with his policies.

Mr Chavez, 58, was diagnosed with cancer last year but says he is now fully recovered.

He has been in power since 1999 and has nationalised key sectors of the economy.

Venezuela is a major oil producer and high oil prices have allowed his government to fund healthcare, education programmes and social housing.

In his campaign, Mr Capriles, who headed a coalition of 30 opposition parties, said the president's policies had led to bureaucracy, inefficiency and shortages.

Analysts say Mr Chavez's victory will be welcomed by several countries in the region - including Cuba and Nicaragua - that benefit from his Petrocaribe scheme which provides Venezuelan oil at preferential rates.

After the election result was announced, President Fernandez tweeted: "Your victory is our victory! And the victory of South America and the Caribbean!"

"Viva hermano Chavez! We hope Haitians will soon again also have their own elected president, not a puppet clown imposed by the Clintons in counterfeit "elections".