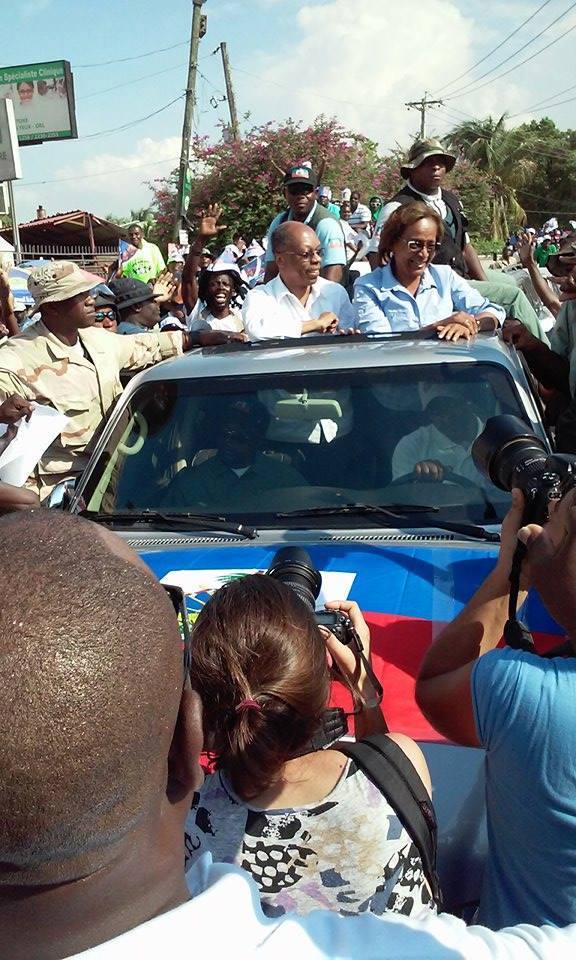 Aristide is back.
Marc H

PORT-AU-PRINCE, Haiti — On the last day of campaigning for the first round of Haiti's presidential election, former President Jean-Bertrand Aristide emerged from his home Friday to drive along the streets of Haiti's capital with the candidate of the splintered political party he founded decades ago.

Aristide, who remains a popular and divisive figure more than a decade since he was ousted in a violent rebellion, waved to thousands through the sunroof of a car, eventually arriving at a huge seaside slum that was once a stronghold of support for him. He stood alongside Maryse Narcisse, leader of the Fanmi Lavalas faction and one of over 50 candidates vying to lead Haiti for the next five years.

The country will hold the first-round presidential vote Sunday along with balloting for numerous legislative races and local offices. The broad array of candidates had until midnight Friday to wrap up campaigning.

In the slum of Cite Soleil, thousands cheered for Aristide as they jumped on motorcycles, crammed into pickup trucks and even jogged to keep up with the caravan. Some shouted, "The king is here!" while others pointed to Narcisse's picture and yelled, "This is our mother!"

Meteayer Mendy, a jobless resident of the impoverished area where officials say pre-election violence resulted in about 15 deaths in recent days, ran alongside the car carrying Aristide and Narcisse as it wound through the pitted streets.

"We want to eat and we want work. We are suffering," he said, explaining why he backed the Lavalas party.

It's not the first time Aristide has publicly endorsed Narcisse, even though he said he would not get involved in politics upon his return to Haiti in 2011 after seven years of exile. Earlier this month, he appeared in front of his home to urge thousands of people to vote for her. But Friday's street campaigning was still a rare public appearance for Aristide, who has mostly kept out sight at his gated home since returning to Haiti.

Josef Nazere said he drove to Cite Soleil to get a peek at Aristide because he has been a longtime Lavalas supporter. "It's the party that knows the pain of the Haitian people," he said.

Political analysts say Narcisse is not one of the top three presidential candidates. During the last election cycle, the faction was barred from the ballot and one-time influential members are now candidates leading other political platforms.

As the crowd followed Aristide and Narcisse's car into the night, other people began to gather at the Champ de Mars park in downtown Port-au-Prince for a rally featuring hip-hop star Wyclef Jean and Jude Celestin, one of Haiti's top presidential candidates. But torrential rains that began late Friday scattered everyone.

Smaller crowds gathered throughout the capital during the day to support other candidates, with dozens of activists zipping through congested streets on roller blades. In the northern city of Cap-Haitien, thousands cheered on presidential candidate Moise Jean-Charles.

Some critics are warning that the country is not fully prepared for Sunday's vote despite assurances from the government that it will be an organized and peaceful process, far better than the messy legislative first-round Aug. 9. Pre-election violence has flared in recent days in and around the Cite Soleil slum.

Pierre Esperance, leader of a rights group called the National Human Rights Defense Network, said they were in "state of uncertainty" regarding election security.

"We don't know if police are going to be providing security," he said.

Police commanders say they have learned from mistakes during the August vote and 10,000 officers will ensure security during Sunday's voting, with assistance by a U.N. peacekeeping force. The U.N. has kept peacekeepers in Haiti since the 2004 rebellion that ousted Aristide but has greatly reduced its numbers.