Frederick Douglass was doing an amazing job and deserved more and more recognition. That idea dawned on Republican President Benjamin Harrison soon after he took up residence in the White House. And so, in June 1889, he chose Douglass as the next U.S. minister resident and consul general to Haiti.

A little more than one year later, Douglass sat at a meeting in Port-au-Prince, perplexed. Rear Admiral Bancroft Gherardi, the commander-in-chief of the U.S. Navy’s North Atlantic Fleet, sat at his side. The career military military officer, unschooled in international diplomacy and notorious for his temper and arrogance, blustered on and on about Haiti’s obligation to cede part of its territory to the United States. Across the table, Haitian Minister of Finance and Foreign Affairs Anténor Firmin and Haitian President Florvil Hyppolite sat unmoved. There was little need for their interpreter. Both Haitian politicians could see Gherardi’s message—and his instability—in his reddened face. It was also obvious from his unnecessarily loud tone.

To Douglass, the uncomfortable scene raised a number of questions. Why was the U.S. government mistaking military strength with diplomacy? How could Harrison elevate such an incompetent man to a position of global significance? And why did the president pay lip service to his accomplishments when he had no real understanding of his intellect or politics?

These questions emerged at a moment of unrest in Haiti. In August 1888, an alliance of regional military forces revolted against Haitian President Lysius Salomon. The insurgents accused Salomon of attempting to make himself president for life. In the end, they succeeded in overthrowing the Haitian government but failed in establishing a stable replacement. The defeated Salomon regime gave way to a provisional government that included General François Denys Légitime, General Séïde Télémaque, and General Florvil Hyppolite. Before Haitians could organize a permanent government, Télémaque was assassinated and the supporters of Hyppolite laid the blame for the act on Légitime. While Légitime became president and strengthened his hold on Port-au-Prince in the aftermath of the assassination, Hyppolite launched an insurrection meant to defeat his rival and establish more economic hegemony for the northern region of Haiti from which he hailed.

The United States saw an opportunity in the unrest. Hyppolite and Anténor Firmin had long recognized the benefits of gaining the support of their powerful neighbor to the north through promises of trade concessions and ambiguous discussions of territorial cessions. For their part, U.S. government officials courted Hyppolite and supplied his insurgents with arms shipments and naval support in the hopes of securing a naval station and increased diplomatic influence in Haiti. Eventually, the realization of an alliance between his rival and the United States created a pronounced anxiety in Légitime and in October 1888 the Haitian president, backed by the French government, ordered the seizure of the Haytian Republic, a U.S. merchant ship that he correctly suspected of providing transportation for and selling arms and ammunition to the northern insurgents.

This incident cohered to a recurring theme in Haitian history—the undermining, destabilization, and delegitimization of its governments by outside interference. As white journalists demanded that the “savages inhabiting that little island” receive a “good drubbing at the hands of the United States Government,” Democratic President Grover Cleveland, who had just lost re-election despite winning the popular vote, responded.1 On December 10, 1888, U.S. Secretary of State Thomas F. Bayard sent a naval force to Haiti to demand the return of the Haytian Republic. Ten days later, confronted with the prospect of bombardment from the U.S. naval force sent to its shore, the Haitian government restored the vessel to the United States. 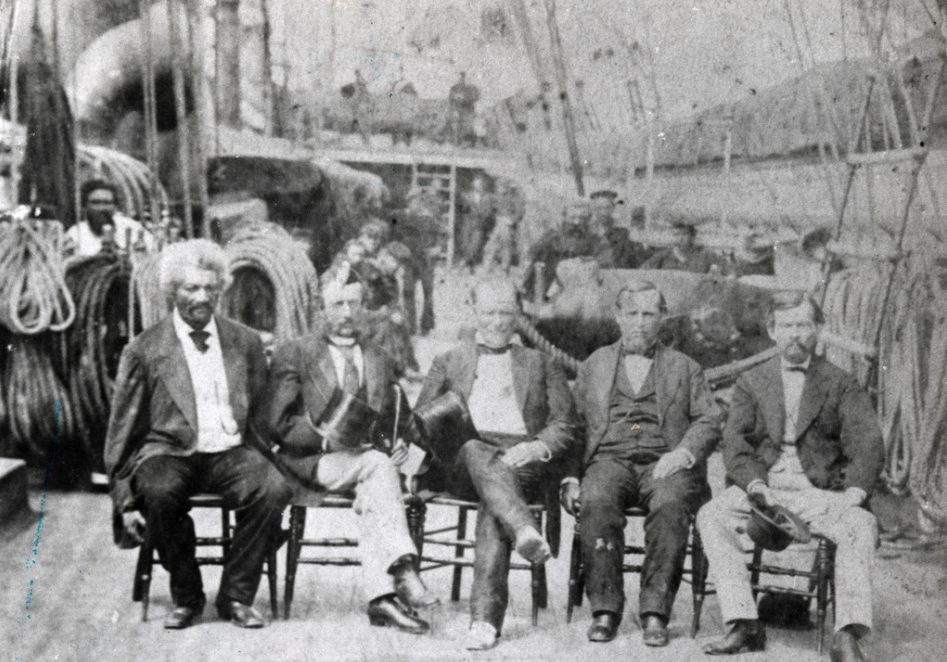 rederick Douglass and the Santo Domingo Commission on USS Tennessee in Key West in 1871. Photo by Oliver B. Buell.


The next summer, Douglass departed for Port-au-Prince. The position of U.S. minister resident and consul general to Haiti had become the prime patronage post for black Republicans during Reconstruction and it would maintain that status into the twentieth century. Douglass was well-aware of the significance of his position and the singular importance of Haiti. In a letter published by leading white and black newspapers just before his departure, he acknowledged that white men and women often pointed to Haiti and cried out ““Look at [It]! Torn and rent by division and revolution”” before asking “what can we expect of the American Negro.” Accordingly, Douglass admitted that he embarked on his mission “to represent the interests of the United States, and also with a view to advance the interests of” Haitians and African Americans, “the people likely to be most benefited by the wise, peaceful, and orderly government of what is called ‘The Black Republic.’”2

The man who appointed Douglass threatened those goals. Republican Benjamin Harrison subscribed to a long-standing belief that Haiti’s Môle St. Nicolas was a desirable prize because of its location at the northern entrance to the Windward Passage, its ample harbors, and its defensible geographic features. His administration wasted little time in acting upon that belief. Eight months after Harrison’s inauguration, the Yantic, an unauthorized U.S. naval warship, arrived at the Môle to measure the distance from the Haitian port to other Caribbean islands where Europeans had established telegraph cables. By the winter of 1890, U.S. Secretary of State James G. Blaine had authorization to use force to acquire the Môle while Bancroft Gherardi monitored the political situation in Haiti to assess the prospects for U.S. territorial gains there.


Against these obstacles, Douglass strived for a more enlightened diplomacy. On New Year’s Day, 1891, Anténor Firmin paid Douglass a visit. The Haitian official denounced a U.S. newspaper for repeating the allegation that Hyppolite, now the Haitian president, had promised the Môle to the United States as recompense for helping bring him to power. Douglass agreed that the claim was baseless but he stressed the U.S. government’s willingness to lease, rent, or purchase the Môle according to “proper means . . . consistent with the peace and welfare of Hayti.” Although their conversation was interrupted, Firmin’s icy reaction to Douglass’s proposal reinforced the U.S. diplomat’s belief that there was “no one point upon which the people of Haiti are more . . . united, than upon any question touching the cession of any part of their territory.”

That was the end of Douglass’s control over what became known as the Môle St. Nicolas Affair. On January 25, 1891, Gherardi arrived in Port-au-Prince with instructions to supplant Douglass and assume the lead role in direct negotiations for the port. Three days later, he, Douglass, Firmin, Hyppolite, and an interpreter sat around a conference table discussing the U.S. acquisition of territory that contemporaries suggested had become tied to national autonomy in the Haitian imagination. Gherardi insisted that the Môle was the U.S. government’s rightful possession in return for its services rendered. Douglass tried to assuage Haitian fears, promising that “the concession asked for was in the line of good neighborhood and advanced civilization, and in every way consistent with the autonomy of Haiti.” Hyppolite and Firmin balked at that suggestion to the great consternation of Gherardi. After Firmin denied that the Môle had been promised to the U.S. government, the temperamental naval officer shouted that Hyppolite was “morally bound” to concede the Môle.3

The Haitian government closed negotiations for the Môle on April 24, 1891. By that point, Douglass could hardly reconcile his responsibility to the U.S. government and his respect for the wishes of his Haitian brethren. The admission that the United States had affected regime change in a sovereign nation was repugnant. The hubris to expect to profit from that interference was too much. And so, Douglass wiped his hands clean of the mess made by incompetent and immoral U.S. officials, announcing that he could not accept imperialism “as a foundation upon which I could base my diplomacy.”

For Douglass, the lessons of this embarrassing episode in U.S. history were clear. Enduring, even. In the summer of 1891, Douglass resigned his diplomatic post and returned to Cedar Hill House, his Anacostia home. There, in a library whose walls soon included portraits of Toussaint Louverture and Florvil Hyppolyte, Douglass crafted his response to white critics who blamed him for the failed negotiations for the Môle. First, Douglass pointed out, the United States had given Gherardi a role for which he had no preparation solely because he was white and Haitians were supposed to be more willing to defer to a white man. That assumption was laughable, Douglass suggested. It showed a stunning ignorance of Haitian history. Besides, he continued, even if a white diplomat could have exploited Haitians, a supposedly great country like the United States should “ask nothing of Haïti on grounds less just and reasonable than those upon which they would ask anything of France or England.”

Put simply, Douglass reasoned, racism was unacceptable policy. Whiteness was no substitute for competence. Historical facts rather than alternative ones mattered. And the nation—the people—owed no allegiance to a state more concerned with flexing its muscles than admitting its moral failings.

Ultimately, Douglass was secure in the knowledge that he had done a credible if not an amazing job in Haiti. He had no reason to doubt himself, to seek reason in the racist anxieties that motivated his critics and shaped their white nationalism. He had no reason to hide his defiance. “I am charged with sympathy for Haïti,” Douglass concluded. “I am not ashamed of that charge.”

The Columbus Enquirer-Sun, December 8, 1888. ↩
““The Black Republic.” Minister Douglass Has Faith in the Future of Hayti,” Huntsville Gazette, July 13, 1889. ↩
This quote and all subsequent quotes are from Douglass, “Haïti and the United States: Inside History of the Negotiations for the Môle St. Nicolas,” Part I, North American Review 153 (September 1891): 343-345. ↩