Mr. President,
I have the honor to present my compliments but hasten to explain the incident at the National Palace immediately after the Meeting with the Prime Minister Garry CONILLE and members of the group of 58 at the Hotel "Le Plaza", Wednesday, October 12.

Members of the group 58 had asked that the minimum demands be met, namely, the fifty (50) million gourdes for each commune and appointment of Vice-delegates. The Prime Minister said he will discuss with his staff the financial possibilities relating to that, with the guarantee to do so in accordance with the deputies.

Since the two (2) other points stand outside the jurisdiction of the President, with whom the Deputy, Abel Descollinnes, already planned a meeting, after the interview with the Prime Minister finished, we visited the National Palace. Arriving at that place, the meeting began with the President of the Republic. The Depute Fritz Chery briefly reviewed the purpose of the meeting. After his speech, the President of the Republic reacted. The Deputy Fritz Chery asked Deputy Virkens Derilus to intervene to detail the major points of the meeting, work that has been given prior to deputy Bourjolly. Given that he had not fulfilled his role, Deputy Virkens was able to respond to clarify some points for the President of the Republic, saying that Mr. President, for the group 58 to ratify the declaration of general policy of the Prime Minister; there must be a disbursement of 50 million gourdes allocated to each municipality, the appointment of Vice-delegates in the communes and cartels are respected.

The President replied "ki kaka sa, nou konen mwen menm, mwen pa gen moun ki ka enpoze m'anyen, mwen gen yon gwo f3 nan boudam ki two lou pou mwen nou pa ka fe'm anyen e pa gen anyen m'ap pedi, nou menm si nou vle fe yon bagay avem'm, nap dim Preziden men sa nou ta renmen epi map gade sa'm ka fe" ("what sh*t is this, you know me, no one can come and impose anything on me. I have a big d*ck in my a*s that is too heavy for me that you can't do anything for me and there is nothing I am going to lose. You all, if you want to do something with me, you will ask me, President here is what we would like to do, then I will look and see what I can do.")

At that moment, I had to intervene to declare to the President that I do not agree.

He said, "ki mele bouda m'ou bliye yon le mwen te ave'w nan la sware nou tape ede moun, et le demain ou moute sou radio se fann ou fann mwen; men mwen pat tande ou non se moun ki di m sa". ("I don't give a sh*t, you forgot when I was with you at a party and we were helping people, and the next day you got on the radio and blasted me; I didn't hear it but people told me that.")

I said "Mr. President, sa yo di ou la se vre wi, se fann mwenn fann ou nan radyo surtout ou konen mwen pa remen ou deja" ("what they told you is true, I blasted you on the radio just because I wanted you to know that I already don't like you")

After this instant, the President lost control and preferred to insult me place threats (tout sot jouman ki genyen (with all the curses available)) to the point where he dared to say: "kom mwen tande ou gen grenn pwouve'm sa la, mwen fe ou pa soti vivan nan pale a" ("I heard you had balls, prove it here, I will make you not leave the palace alive.")

Mr President, I have struggled for democracy in this country and today I find myself facing a dictatorship of the most ferocious sort. Facing the reaction of the President of the Republic yesterday evening, I infer that he will not accept opposition and that he is ready to do everything possible to eliminate obstacles in his path.

Mr. President, the situation is in full swing. If a President of the Republic can come to a parliamentarian in this way and what is worse, in the presence of more than 50 other parliamentarians, this explains clearly, if the people had not acquired a bit of power, I'd be the first messenger that the president would have returned [dead].

Being duly authorized by the people for the executive controller, I ask my colleagues no matter what happens, to remain united to continue the work that has been confided in us, because the future of our beloved country seems somber. My colleagues can draw from this the conclusion to be drawn in order to maintain the Independence and the authority of Parliament, co-custodian of national sovereignty.

I repeat, Mr. President, the expression of my patriotic greetings.

It seems that Martelly has only his zuzu as brain.Who wants to know how big his zuzu is?why does he have to mention the size of his dick in a metting with men?nan kisa moun pran la?men moun elit ki di pep la two bet poul chwasi moun ki pou dirije peyi ya ba nou.What a shame.
Invité 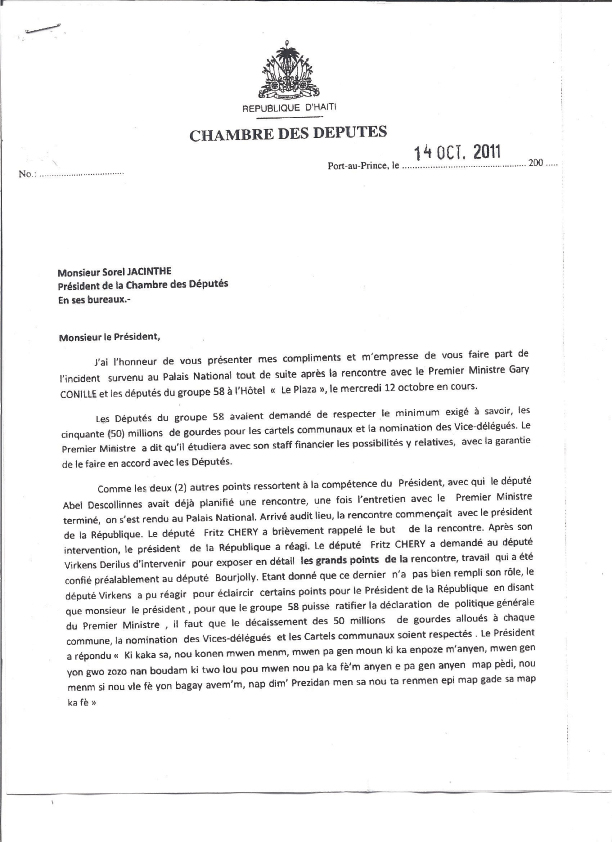 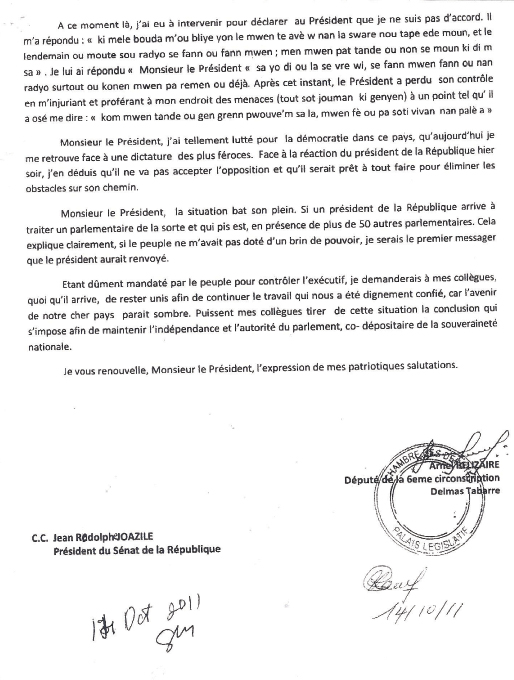