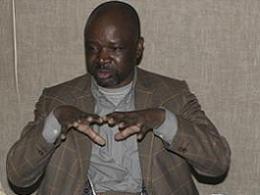 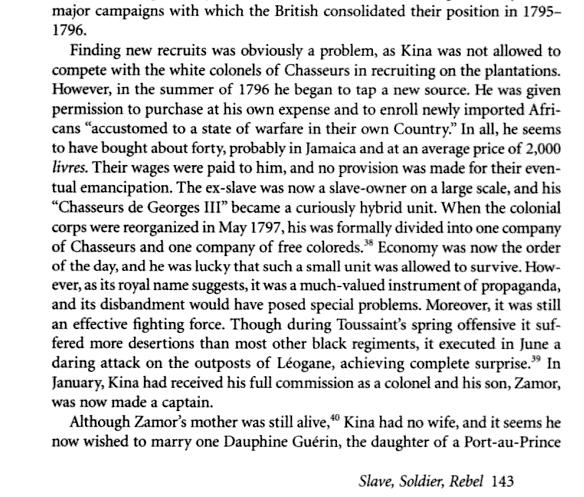 "In Saint Domingue, despite the multiplicity of African ethnicities represented among its slave population, certain particular African groups were disproportionately numerous. Although slaves were drawn from all regions of Africa, from Senegambia to Mozambique, two regions of supply were overwhelmingly predominant: West-Central Africa (Angola) and the ‘Slave Coast’ (Bight of Benin). Over the entire period from the 1720s to the 1790s, West-Central Africa supplied nearly half (45%) of the slaves whose ethnicities are recorded, the Bight of Benin over a quarter (28%). Within each of these two regions, moreover, a particular ethnicity of slaves predominated: those shipped from West-Central Africa were overwhelmingly ‘Congo’; while of those shipped from the Bight of Benin, around half (52%) came from Gbe-speaking groups, generally called ‘Radas’ (or ‘Aradas’). This numerical dominance of Congos and ‘Radas’ is evidently reflected in the structure of the vaudou religion, whose principal deities are organized into the two complementary/opposed groups called ‘Rada’ and ‘Petro’, of which the latter seem to be mainly of Congo origin.
Cultural influence is not, however, directly or simply correlated with demographic strength, since although Congos were around three times as numerous as the Radas in the Saint-Domingue slave population, it is the Rada rather than the Petro cults which are hegemonic within the vaudou system (the term ‘vaudou’ itself being, of course, of ‘Rada’ origin). The explanation for this apparent paradox is as yet unclear, although one factor may have been that the Radas were relatively more numerous in the earlier part of the eighteenth century (the balance between them and the Congos shifting towards the latter during the course of the century), so that Rada elements were entrenched in Saint-Domingue slave culture at an early stage; another may have been that the proportion of females among ‘Rada’ slaves was relatively higher, thereby facilitating the process of cultural transmission. In addition, it should be remembered that many of the slaves taken from Congo were already Christian, rather than followers of their ‘traditional religion’.

The African background to the insurrection of 1791
The African background is relevant to the success of the slave insurrection of 1791 in various ways. In the first place, as John Thornton has argued in a recent (1991) article, it is likely that the military effectiveness of the insurgent slaves reflected their previous experience of military service in Africa. Although Thornton based this argument more on grounds of a priori probability than direct documentation, he was able to cite one explicit statement, by the rebel leaders Jean-François and Biassou shortly after the uprising, that their African-born followers had been ‘accustomed to war’ in their homelands.
That attitudes and beliefs derived from Africa also played a role in the insurrection seems likewise hardly in question. The classic study of Haïtian history by Thomas Madiou records traditions of the rising, which make clear that different insurgent leaders appealed variously to Christianity and to African religions, or sometimes to a combination of both. Thus the original leader of the insurrection in the North, Jean-François, employed a Catholic priest as his regimental chaplain, but his two principal lieutenants, Biassou and Jeannot, surrounded themselves with priests of African cults (‘sorcerers’ and ‘magicians’, in Madiou’s own loaded terminology). In the West, one insurgent leader in 1792-3, Romaine Rivière, claimed to be the godson of the Virgin Mary, but another, Hyacinthe Ducoudray, although he obliged a Catholic priest to bless his army, also employed ‘sorcerers’ who promised his soldiers that if killed they would be re-born in Africa; while the African-born Haolou depended on ‘sorcerers or papas [i.e. vaudou priests]’; and later, in the war of independence in 1802-3, Lamour Derance likewise employed ‘fetish priests and papas’.
It is questionable, however, whether, as is sometimes suggested, it was African religion which provided the means through which the insurgent slaves achieved a common organization, because it is likely that ‘voodoo’ as it existed in the revolutionary period still represented a series of essentially separate ethnic cults, rather than a synthetic system which could have transcended ethnic divisions: this seems not only probable on a priori grounds (given the division into separate ‘nations’ which characterizes the organization of ‘voodoo’ cults even to the present), but has been argued on the basis of the (admittedly fragmentary) contemporary record in a recent study by David Geggus. African religions probably served to secure the solidarity and loyalty of individual war-bands, rather than unity at the level of the insurrection as a whole. There is, indeed, some suggestion in Madiou’s account that the insurgents were organized into ethnic regiments: thus Jean-François and Biassou in 1791 are described as commanding ‘bands composed of Congoes, Mandingues [Mandinka], Ibos [Igbo], Senegalese, etc.’, and Haolou in 1794 ‘bands of Congos, Ibos, Dahomets, Senegalese’; and more explicitly, Lamour Derance’s forces in 1802 were ‘grouped by tribes ... bands of Congoes, Aradas, Ibos, Nagos, Mandingues, Hausas [emphasis added]’. Consideration of the African ideological background to the Haitian revolution should therefore arguably seek to identify particular ethnic traditions which may have played a role.
In recent literature, the main attempt to link the insurrection of 1791 to a specific African ideological tradition has been by John Thornton, in a recent (1993) article which argued that the civil wars (EN PASSANT KITAP FEED SYSTEM TRAITE DES NOIRS LA , EN PROCURANT DES PRISONNIERS DE GUERRE) which occurred in the kingdom of Kongo, from which many slaves were brought to Saint-Domingue, between 1779-88 might have moulded the insurgents’ perceptions of the character and limits of royal authority, as much as the contemporary Revolution in France. In the specific terms in which it is presented, this argument is largely speculative; there is no doubt that some of the slaves interpreted the revolutionary situation in the light of their Kongo experience, but (as Thornton’s own account shows) the point in the progress of the insurrection where this connection is most explicit is the period immediately following the execution of the king in France, when, ironically, these African parallelisms led them to support the monarchy (and the Roman Catholic Church) against the Revolution. During 1792-3, when a sort of monarchist international comprising Spain and Britain was intervening in support of the French counter-revolution, Madiou reports that there was a popular belief among the insurgent slaves that the King of Kongo was also part of the anti-Republican coalition; and the rebel leader Macaya, in rejecting Republican overtures in 1793, declared himself ‘the subject of three kings, the King of Kongo, master of all the blacks, the King of France who represents my father, and the King of Spain who represents my mother’."
ainsi ne soit-il

"Recent research on Saint-Domingue plantation records indicates that at the time of the revolution of 1791, between 60-70% of slaves were African-born. Indeed, tension between the Creole leadership and the predominantly African rank-and-file was an important sub-text in the development of the Haïtian revolution. It is NOT argued, it should be stressed, that African-born slaves were more likely than Creoles to rebel, a proposition which the pattern of the Haïtian insurrection does not in fact support: the rebellion was centred in the sugar plantations on the coastal plains rather than in the coffee plantations in the hills, although the latter contained a higher proportion of African-born slaves (largely because coffee cultivation had developed more recently), and the area where the rebellion began, the northern plain, was in fact that with the highest proportion of Creoles, indeed ‘probably the only part of Saint Domingue where creole men outnumbered African men’".

Joel a écrit:Sa m ap di w sèlman ;listwa enpòtan tankou jan yo di l ""the past is not the past ,because it is still with us"".
Wi ,nou paka prizonye pase an ,non plis .