PORT-AU-PRINCE, Haiti, August 10, 2015 (AMG) — The official results from yesterday’s first round of legislative elections won’t be announced for 10 days, but as polls closed last night, the numbers were coming in nevertheless: 54 voting centres (5% of the total) forced to close because of violence and intimidation; at least 5 people killed, and 137 arrested for election-day violence or disruption.
The long-awaited elections, the country’s first in over four years, had been greeted with enthusiasm and energy from the candidates and political parties: 128 different parties registered to participate in the election, and during the last two months, every available surface – from telephone poles to broken-down cars left on the roadside – was plastered with campaign posters.
But the response from the general public was a shrug: even before reports of violence at voting centres discouraged would-be voters from turning up, most analysts were predicting very low turnout.
The sheer scale of the election — all the positions that should have been contested during the last four years are now being contested in the same year — combined with the staggering number of political parties fielding candidates, meant that this election was always going to be a logistical challenge.
To these logistical impediments were added a number of political hurdles, some of which arose during the course of the campaign, but many of which have much deeper roots. All these combined to create a strange mix of apathy and instability that cast a pall over elections that were supposed to return Haiti to democratic normalcy.
Here’s what went wrong.
Official laxity and denial: Throughout the day, as reports of irregularities and attacks on polling stations multiplied, various officials, from the President on down, continued to insist that everything was under control. Indeed, the head of the Provisional Electoral Council (known by its French acronym CEP) triumphantly declared that the skeptics who questioned the CEP’s ability to organise a free and fair election had been proved wrong.
This naïveté, or else outright denial, in the face of apparent instability also characterised the Haitian authorities’ response to pre-election day violence. Even when several candidates were attacked in the weeks leading up to the election, the CEP and police insisted that the violence was unrelated to the campaign. 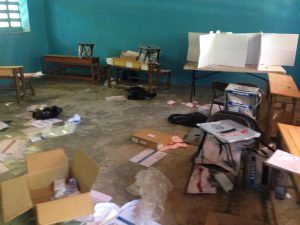 This attitude of denial appears to have influenced security planning for the election, as guards at voting centers were either unprepared to handle attacks by partisans or totally absent. Some eyewitnesses reported that police didn’t arrive at a voting center that was ransacked in Cité Soleil until one hour later, whilst another report indicated that three officers had been present when the tension started, but failed to intervene.
Party Observers: One measure meant to increase transparency of the voting process was allowing political parties to send representatives to the voting centres to observe both the actual vote and the counting afterward. In theory, having representatives of every side should reduce the potential for irregularities that favour one particular party. But in practice, allowing all 128 parties to send a representative to all 1,508 voting centres was logistically impossible.
One the eve of the election, as party observers waited up to 12 hours to get their credentials, the CEP decided at the eleventh hour to allow only five observers per voting centre, but without a clear formula for how those spots would be distributed amongst the parties. This led to mass confusion on election day, as observers from different parties at some of the larger voting centres fought, pushed and shoved one another out of the way, trying to make their way in. In at least a few of the voting centres, the vandalism of ballot boxes was perpetrated by disgruntled party observers who’d been denied access.
Late opening: Although all voting centres were officially scheduled to open at 6am, actual opening times varied widely across the country. A crowd-sourced map of election incidents showed reports that some voting centres didn’t open until 11am.
The official ballots for the election, which were imported by UNDP from Dubai, didn’t arrive in Port-au-Prince until just over a week before the election, and some polling places still hadn’t received their ballots by Sunday morning.
There also seemed to have been a bit of carelessness in the printing of the ballots.
“Indelible ink”: The CEP’s assurances that the ink used to mark who had already voted was ‘indelible’ proved not to be universally true shortly after the first voters left their polling places. While some voters were indeed left with ink stains on their fingers, many were able to easily wash it off with nothing but water, raising questions about whether some voters would be able to vote multiple times. 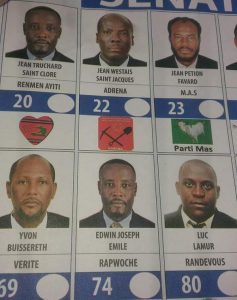 Ballot for Senatorial candidates. Look at #20 and #74. Image credit @jistispoujacky

Foreign intervention in previous election: Although not immediately apparent, the intervention of the ‘international community’ (specifically the US and Canada) during the country’s last election cycle in 2010-11 had a profound effect on this one.
After results from the first round of presidential voting in 2010 showed Michel Martelly in third place, his supporters took to the streets to protest the outcome, demanding that their candidate be included in the second-round run-off. The Organization of American States (OAS) obliged and intervened, declaring the first-round results null and void, and replacing Jude Célestin, who had come in second, with Martelly on the second-round ballot.
This blatant foreign intervention had at least two effects: It drastically reduced Haitian voters’ confidence in the efficacy of their votes, contributing to a general lack of trust in elections, and thus widespread apathy (if not antipathy) toward this particular election. Secondly, it legitimised the role of partisan instigators in determining election results.
Having managed to cancel out 5% of the votes before they were even tabulated, rowdy partisans have already made their mark on this election, and, following the example of 2010, may strike again when official results are announced next week.
Illogical voting registration: Another recurring problem on Sunday was voters showing up to polling places and being turned away when their names were not found on the lists. This can be attributed, at least in part, to the haphazard and illogical way in which registered voters were assigned a polling place. For example, Daniel, a resident of Delmas — a neighbourhood in Port-au-Prince that lies east of the city centre — was assigned to a voting centre in Carrefour, a city west of Port-au-Prince. Yves, who was registered to vote in the southern city of Jacmel, was assigned to a voting centre in the rural hinterland.
Many of those who knew before election day that they had been registered in faraway voting centres chose to stay home. But others, assuming they could vote at the centre nearest their home, showed up only to be disappointed.
Accessibility: For the minority of Haitians who still trusted the integrity of the elections and wanted to vote, an additional obstacle was put in place: the government announced that no public transport would be allowed on election day. Although this ban wasn’t strictly enforced — I saw several ‘tap-taps’ (pickup trucks converted into buses) on the roads of Port-au-Prince yesterday — it certainly acted as a deterrent, thus discouraging those would-be voters who had been assigned to vote at polling places far from their home.
Some of these problems can be addressed before Haiti’s presidential elections on October 25; many cannot. After what they saw yesterday, Haitian voters will require a lot of convincing.
Joel

Jump to: navigation, search
Ghanaian general election, 2012[th]Ghana[/th]Ghana's general election was held on Friday 7 December 2012 to elect a president and members of parliament in 275 electoral constituencies.[1] Owing to the breakdown of some biometric verification machines, some voters could not vote, and voting was extended to Saturday 8 December 2012.[2] A run-off was scheduled for 28 December 2012 if no presidential candidate received an absolute majority of 50% plus one vote.

Jump to: navigation, search
Ghanaian general election, 2012[th]Ghana[/th]Ghana's general election was held on Friday 7 December 2012 to elect a president and members of parliament in 275 electoral constituencies.[1] Owing to the breakdown of some biometric verification machines, some voters could not vote, and voting was extended to Saturday 8 December 2012.[2] A run-off was scheduled for 28 December 2012 if no presidential candidate received an absolute majority of 50% plus one vote.
Joel

How much do localities spend on elections? ASK THIS | February 16, 2006 Estimated costs: $10 per voter (in year 2000); of every dollar 35 cents is for voter registration, 35 cents for equipment and Election Day expenses, and 30 cents for administration. - See more at: [url=http://www.niemanwatchdog.org/index.cfm?fuseaction=ask_this.view&askthisid=175#sthash.xC3l3Cg0.dpufhttp://www.niemanwatchdog.org/index.cfm?fuseaction=ask_this.view&askthisid=175#sthash.xC3l3Cg0.dpuf[/b[/url]]
Antitétanix