Florida’s midterm Senate election is a race to watch this November – and not just because it will be a tight match pitting a sitting governor, Republican Rick Scott, against a sitting senator, Democrat Bill Nelson.


Black voters, who make up 16 percent of Florida’s population, will likely help tip the race in one candidate’s favor. Black Floridians have long been a swing constituency in the state and have played a key role in every close presidential race since 2000.

But my research on minority politics in the South shows that it is time to re-examine old assumptions about Florida’s so-called “black vote.”


The Caribbeanization of black politics
That’s because not all black people in the United States are African-American.


Florida is home to the country’s largest foreign-born black population. One in three black Miami metropolitan region residents today is an immigrant, according to the Pew Research Center. Many are from the Caribbean.


The black immigrant population in the U.S. has more than quadrupled since 1980, led by an influx of Haitians and Jamaicans. An estimated 376,000 Haitians represent fully 2 percent of Florida’s population. Another 30,000 or so Floridians were born in Jamaica.


As my 2018 book on “The Caribbeanization of Black Politics in America” outlines, these demographic shifts are upending political patterns in predominantly black communities.


I discovered that while these populations are mostly Democratic, foreign-born black communities in all four cities are more willing than African-Americans to put aside partisan differences and vote Republican.


Haitians are also more likely to be members of the Republican Party and to run for office as Republicans.


The first and only Haitian-American in Congress, Mia Love of Utah’s 4th district, is a Republican.


In Florida, almost 4 percent of the Haitian-born population is Republican, according to University of Florida political scientist Daniel Smith. Just under 20 percent of Florida’s Haitian Americans are Democrats.


Many others are not registered voters in the U.S., though they may remain active in Haitian politics.


Donald Trump campaigned in Miami’s Little Haiti neighborhood in 2016. He went on to win 20 percent of Florida’s Haitian vote.


After the election, Haitian-American activist Ezili Danto suggested that many Haitian Floridians had supported Trump in part to demonstrate that they won’t always vote Democratic.


Many Haitians also believed the corruption allegations that had been leveled against the Clinton Foundation, whose work in Haiti after the 2010 earthquake left it with a bad reputation on the island.


Community tensions
As Florida’s Caribbean population has boomed, these political differences have led to some showdowns between African-Americans and the Haitian community.


The election of Republican Josaphat Celestin as mayor of North Miami in 2001 is illustrative. He was the first Haitian-American elected to lead a large U.S. city.


As I outline in my book, Celestin’s campaign appealed directly to Haitian voters in this municipality of 60,000, by arguing that they needed their own political representation in a largely African-American city historically governed by white elected officials.


The 2001 election brought not just Celestin to power, but also put a Haitian-American majority onto the five-member city council, ushering in a new era in North Miami politics. Haitian voters had successfully replaced the city’s old white political leadership with new black leadership.


But they did so by defeating a Democrat, Duke Sorey, whom most native-born black Floridians hoped would become the city’s first black mayor.


Motivating black voters
All of this means that neither Florida Senate candidate should take black voters for granted in November.
Nelson, the Democratic sitting senator, has tradition on his side. Black Floridians — like African-Americans nationwide — have voted overwhelmingly Democratic in every election since 1948. In 2012, higher-than-usual black turnout for Barack Obama helped Nelson handily secure his second Senate term.


As the only Democrat in statewide office in a state dominated by Republicans, Nelson will again need above-average black turnout to beat Scott. Yet the senator recently said he believes black Floridians are already “motivated” to vote for him and has faced accusations of not courting them enough.


Scott alienates black voters
Carroll resigned in 2013 amid accusations of financial impropriety. She later wrote a book accusing Scott of treating her like an “unwanted stepchild” and using her to win black and female votes.


As governor, too, Scott has in fact had a very tense relationship with black Floridians.


In 2011, he reduced funding to the state’s two historically black private colleges, including Florida A&M University. That same year, Scott requested that Florida A&M’s president be suspended after the hazing death of a student, a decision the college’s board of trustees rejected.


When students protested his recommendation, Scott suggested he could relate to them because he grew up in public housing. It was the second time the governor had insinuated that all black people are poor.


On several occasions, Scott has also been accused of suppressing black voters by making it harder for formerly incarcerated people to restore their voting rights.


I doubt Florida’s Haitian voters will support Scott as they did Trump in 2016. But the days of assuming that the black vote will definitely go Democratic are over.


The black immigrant population in the U.S. has more than quadrupled since 1980, led by an influx of Haitians and Jamaicans.


An estimated 376,000 Haitians represent fully 2 percent of Florida’s population. Another 30,000 or so Floridians were born in Jamaica.
Joel

As the Haitian-American population has grown to more than 300,000 in South Florida, so too has its political influence.
People with Haitian ancestry now hold office in Broward, Palm Beach and Miami-Dade counties. Major candidates court the region’s Haitian-American voters. And non-Haitians from both political parties are analyzing and attempting to engage with the community’s voters, hoping to reap long-term political gains.
“There are a lot of Haitian voters. The population is growing,” said Michael Barnett, chairman of the Palm Beach County Republican Party and vice chairman of the Republican Party of Florida. “And there is power in that vote.”
Ronald Surin, a vice president of the Haitian-American Democratic Club of Broward, said his community’s influence is increasing.

“The last couple of years have been very, very good to our community in terms of political presence,” Surin said. “We have gathered a lot of strength in local communities.” 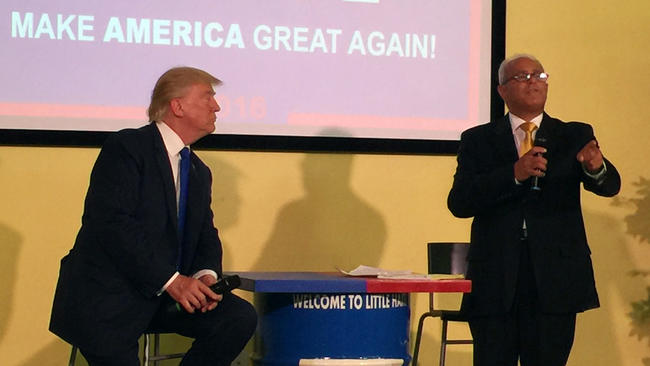 To be sure, the number of elected officials isn’t large. The Haitian-American community doesn’t enjoy the clout of other long-established voting blocs in South Florida: African-American, Cuban-American, Jewish and Hispanic voters. And the Haitian community suffered a political setback last month when the Trump administration rejected calls for an 18-month extension of special immigration status for Haitians citizens living in the U.S.
Months of rallies, news conferences, Twitter storms and pleas from politicians — Democrats and Republicans — failed. The Trump administration authorized a six-month extension of temporary protected status, with the secretary of homeland security explaining that the 58,000 people living and working legally in the U.S. since a devastating 2010 earthquake should use the time to put their affairs in order and prepare to leave the country.
After the decision, leaders in the Haitian-American community, non-Haitian allies, and Democratic and Republican elected officials said they’d continue to push for a longer-term extension, with some professing optimism at the prospects of a reprieve from the Trump administration.

Notwithstanding the TPS decision, the political landscape has changed dramatically — for the better, in the view of Haitian community leaders — during the last 20 years: 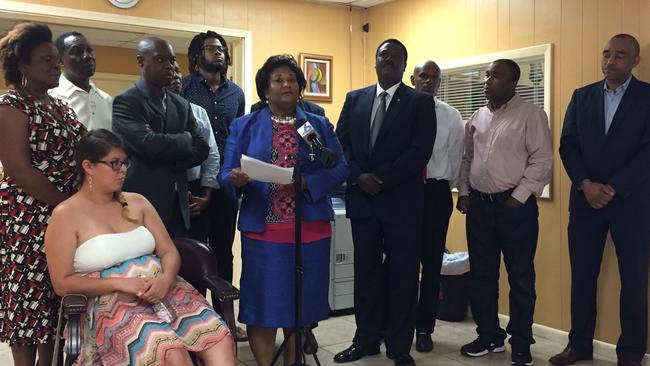 In 1998, Claude P. Louissaint, now a Boca Raton business consultant, ran for a Broward-Palm Beach county state Senate seat in a district with mostly black voters. He was crushed in the Democratic primary.
Louissaint said he was part of the first generation of would-be elected officials from South Florida’s Haitian community. They all lost that year, he said, but that soon started to change. North Miami elected a Haitian-American to the City Council in 1999, and a district that includes Miami’s Little Haiti community sent a Haitian-American to the state House of Representatives in 2000.
Now, each of the three South Florida counties has Haitian-American elected officials.
The importance of having even a small number of elected officials of Haitian ancestry, even though they represent a broader constituency than just the Haitian community, can’t be overstated, said Marc Lafalaise, president of the United Haitian-American Democratic Club in Palm Beach County.
“We have someone there who can advocate there for us,” he said.
[/size]

[size]
As a presidential candidate, Donald Trump visited Miami’s Little Haiti last year, calling those he met “unbelievable people” and promising to champion Haiti and its people. Barnett pushed for and helped orchestrate the visit. He said the campaign took pains to make sure the visit received extensive coverage in Haitian community media outlets. 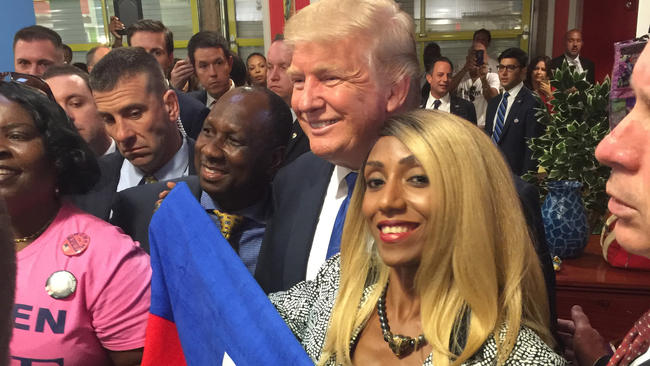 Democrat Hillary Clinton also stopped in Little Haiti. She was a constant visitor to South Florida during the general election campaign, but her Little Haiti appearance wasn’t until seven weeks after Trump’s.
In 2014, Republican Gov. Rick Scott, who was engaged in a neck-and-neck campaign for re-election (he ultimately won by just 1 percentage point) courted Haitian-American church pastors in Palm Beach County and met with others in the community, something Barnett said Scott has continued. The governor can’t run for re-election next year because of term limits but is widely expected to run for U.S. Senate.
[/size] 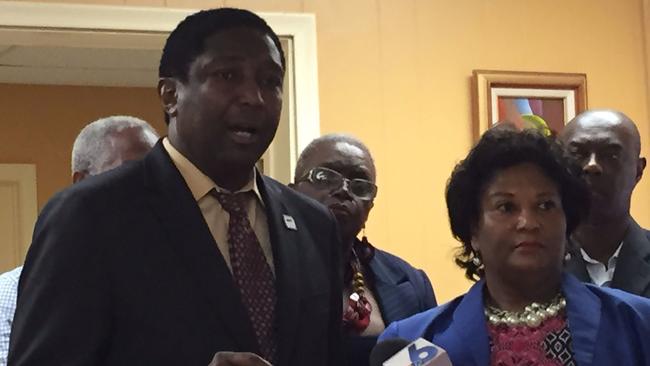 Population growth is one reason for influence. “The voter base is large. We are involved. We are beginning to get more and more involved,” said state Rep. Al Jacquet, D-Lantana. “This is a very valuable group of voters.”
Kevin Hill, a political scientist at Florida International University, said a critical mass of population is crucial to create political influence. That doesn’t just mean numbers.
“At the end, political power — at least getting elected to office — comes down to concentrations of people. Are you concentrated in an area?” Hill said, explaining that’s why Broward and Palm Beach counties haven’t elected large numbers of Hispanics. “They’re not concentrated. Haitians kind of are, certainly more than the different Hispanic groups in Broward and Palm Beach.”
Surin and Lucdwin Luck, a Republican committeeman from Oakland Park, said they sense more interest in getting politically involved as people of Haitian ancestry who have grown up in the U.S. feel more integrated in the fabric of society. Luck’s parents emigrated from Haiti; he was born in Fort Lauderdale.[/size]
That younger generation doesn’t have the same kind of desire to return to Haiti, which has had decades of political turmoil and natural disasters. Many have interests that extend beyond Haiti and immigration policy.
Louissaint and Barnett said the Haitian community’s voters are largely Democratic. If both parties think there’s benefit from working in the Haitian community, that gives voters the kind of clout they might not enjoy if they’re automatically seen as reflexively voting all of the time for only one party.
Louissaint said many Haitian-Americans, though registered as Democrats, are philosophically conservative, and church leaders who he said tend to be conservative have lots of influence. Voter registration records don’t break down voters’ ancestries.
Hill said he thinks it’s unlikely that Republicans can ultimately win large percentages of the vote in the Haitian community. But, even a relatively small percentage can make the difference between winning and losing in a close election.
Louissaint said the Cuban-American community provides a model for Haitian-Americans.
“People can’t wait to see how far the Haitian community is going to go,” Louissaint said. “It can be done. We can cross over. I’m very confident. You have a generation of Haitian leaders growing up that pretty soon I am quite certain we are going to make a difference, not just in South Florida, but throughout the country.”